I have joined both the Daring Bakers & Daring Cooks since Agust 2013, yet guilty as charged, I have not participated in any challenges since. However, the February challenge hosted by Sawsan of Chef in Disguise features such a beautiful bread that beats my laziness instantly (although not enough to have this post any time sooner).

The bread form is inspired by Valentina Zurkan’s work, and honestly, I feel the urge to jump right into the kitchen just by Googling her name. I have always known that bread can be THAT beautiful but I never know that I could also make such creation like that too, from scratch! She gave the two choices of Nutella Twists and Cinnamon Bread which I instantly choose the latter. Cinnamon bread has always been my forte, hands down! 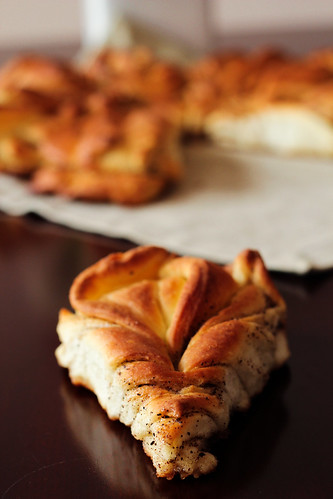 Warm welcome to my blog,
I’m a 22 year old Vietnamese girl, studying in England, who happens to fall in love with cooking & baking
If you like my blog, then we have at least 2 things in common, the love of food and the joy of cooking
So, get inspired, open up to new adventures on your food journey and most importantly, enjoy yourself! I'd love to hear from your experiences and hope to learn new things from you all
Loads of love,
Phuong